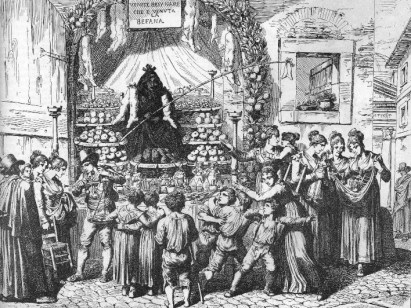 La Befana is known  throughout history as a wise and magical woman who arrives flying on a broom or sometimes even on a donkey bringing gifts to the children, leaving figs, dates, nuts, and candy on the eve of the Epiphany.

Her principal function is that of reaffirming the bond between family and
the ancestors through the exchange of gifts.

A popular belief is that her/the name Befana derives from the Feast of Epiphany or in Italian, “La Festa dell’Epifania (Epiphany in English) is a Latin word with Greek origins. Epiphany means either the Feast of the Epiphany (January 6) or ‘manifestation (of the divinity). – Wikipedia

There is evidence to suggest that Befana is descended from the Sabine/Roman goddess named Strina. In the book Vestiges of Ancient Manners and Customs, Discoverable in Modern Italy and Sicily by Rev. John J. Blunt (John Murray, 1823), the author says:

“This Befana appears to be heir at law of a certain heathen goddess called Strenia/Strenua/Strenae, who presided over the new-year’s gifts, “Strenae’, from which, indeed, she derived her name. Her presents were of the same description as those of the Befana. Moreover her solemnities were vigorously opposed by the Christians on account of their noisy, riotous, and licentious character“.

Judika Illes wrote, “Befana may predate Christianity and may originally be a goddess of ancestral sprits, forest, and the passage of time.” Some identify this wandering, nocturnal crone with Hekate.

Again, some scholars believe “Strenua” is the original Goddess now known as Befana today, and the Befana tradition is derived by the Strenua cult.

In Roman mythology: Strenua, Strenia, Strenae was a Sabine Goddess.
She was the Goddess of the New Year, Purification, Well-being and Strength. Her themes are children, family and protection.

Her symbols: Verbena, Bay Laurel, Palm, Honey, Figs, Leaves, Money and Gold Coins. Strenua had a shrine and grove at the top of the Via Sacra and there within her grove grew Verbena, which was considered to be sacred.

Her cultus was introduced by Titus Tatius who ruled as co-chieftan with Romulus. King Tatius who was the first to reckon the holy branches (verbenae) of a fertile tree (arbor felix) in Strenia’s grove as the auspicious signs of the new year. It is said that Strenia is associated with New Year’ Day, she presides over words of encouragement, as well as gifts of good scented omens in the form of branches of Verbena. – Wikipedia

Strenia states that A symbolic gift each receives, are the twigs of Laurel sometimes wound with red yarn. Each twig should hold seven leaves; they are then burned as incense for Strenia with prayers for good health. – mimifroufrou.com/scented salamander

Strenia is comparable to Greek, Hygenia and to Latin, Salus. St. Augustine says that Strenia was a goddess who made a person Strenuus, “vigorous, strong. During the Principate, these Strenae often took the form of money. – Wikipedia

The mythical traditions of the Befana arriving on a broom or even a donkey testifies to her association with plants and animals which in ancient times had a scared value. In mythology the branch is home to the spirit of the ancestor, which is why it has assumed the magical function of flight and could have a role of evocation as well as distancing from the spirit. These actions were conceived as a voyage, a flight from a far-away kingdom.

Besides the link, with the cult of the hearth, the Befana personifies a close link to fire itself, whether astral (brought from the stars, appearing as a meteor) or earthly, (for example: on the eve of  Befana holiday bonfires are lit to burn her efigy). This action is not meant so much as to exorcise a negative entity, as to re-accompany at the end of the big holiday the spirit of the ancestors to the kingdom beyond the tomb through the symbolics of the ascending fire.

The name “Befana” derives from the word “epifania”, this being the Italian name for their religious festival. The Epiphany holiday includes purifying rites and benedictions with water. The water being prepared on the eve of Epiphany has a sacred and warding -off-evil-spirits value and used in moments of  family-crisis. In Abruzzo, Italy, it is called “Water of the Boffe”.

Figures of the Kings Magi, in the historical tradition, were priests of sacred fire. The Magi symbolized the three worlds: earthly gold, celestial incense, (frankincense) and myrrh from beyond the grave. The three substances can be linked to each, of the three-sacred fires of Vedica: India, Avestica, Persia. This making it possible through fire and gifts to establish a connection between the Magi and the Befana in the expectation of the holiday of January 6th.

In anthropology the Epiphany, the last festivity of the Christmas period, is considered a celebration of renewal, announcing the coming of the new season. In the peasant culture that was the moment when forecasts and predictions on the future were drawn, and people used to sit around the fireplace telling fantastic tales. On that magical night our great- grandparents used to look into the future interprating natural phenomena.

The Befana is also related to the mysterious Rites of the Celtic peoples who once inhabeted the whole of Pianura Padana and part of the Alps – when wicker puppets were set on fire in honor of ancient gods. The witch, the woman magician (the priestess of the ancient Celtic culture that knew the secrets of nature) took form of the Befana. The “coal” that she would leave to the nasty children was actually also a symbol of fertility tied to the scared bonfires and the “ceppo”.

The other, almost universal symbol accompanying the lady – the broom, that clearly resembles a magic wand, is also connected to the tree and the nature rituals of Celts in their forests. In the pre-Christian calendar solstice rites used to celebrate the cycle of the sun, and were slowly merged with the cycle of the life of man and the generations, following one another. This eternal cycle was represented by symbols to exorcise anxiety.

In many cultures the relations between grown-ups and children is based on the observance of rules achieved through the fear of punishments and expectations of reward.
To this family of figures belong the ogre and witch, transformed into the more positive and pedagogical figures of Santa Claus and the Befana.

The Befana best known as the “the giver of gifts”, the good witch who arrives on a broom bringing gifts to children has been around throughout history. However connected to Biblical times with King Herod, in mythology, among the Italians, Celtics or Pagans. In Norway, Palestine, Italy or in Russia known as the Babushka.

Whether she be known as a fairy, a goddess, a priestess and many other entities or names, or of places near or far, you can find there is an abundance of interesting resources to research  La Befana.

The legend of La Befana